Secretariat of International Landcare (SILC) is a non-government organisation that commenced in 1998 under the leadership of Sue Marriot, Victoria Mack and Mary Johnston. 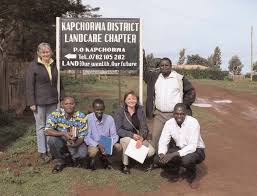 SILC’s charter was to support interest in the adoption, and adaptation, of the Australian Landcare model in and by other countries.

Over many years SILC worked to support a growing interest in Landcare across many projects in thirteen countries around the world through innovative tours, seminars and active-learning, field-based training in Australia. SILC’s efforts have been important, with its directors delivering papers and promoting Landcare in places as diverse as the Philippines, Canada, Iceland, Inner Mongolia and Italy. SILC was instrumental in supporting a strong representation at the first International Landcare conference in Melbourne which was pivotal in the uptake of the Landcare model in many countries. Their on ground work was particularly focused on Indonesia, Philippines, Bangladesh and Pakistan.
Often the question is raised why is “Landcare” different to any other “aid” project. “Aid” when given for the long term (as opposed to short term disaster aid) from one country to another country is given with “strings” attached. “Landcare”, however, is about giving local people the support and encouragement to become aware of their own issues and design and implement their own projects that are specific to their community, their needs and their cultural context.
Landcare enables and allows people to address environmental, social and economic problems without the pressure and constraints from outside bodies, governments and individuals with different agendas.
Landcare is a development model but it has many elements that make it very different from typical development approaches – the most important being that the people on the ground take responsibility for their actions, usually with the support of a local facilitator or facilitating agency.
In 2020, SILC merged with others to form Global Landcare and its members continue to promote Landcare across the globe.